UEC's own Chris Wellington has received the Northwest Public Power Association’s Safety Heroism Award for his quick response to help a motorist who had collided with a power pole near Hermiston. 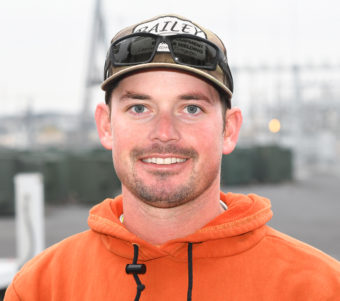 Chris Wellington was recognized April 14 at the NWPPA’s Engineering & Operations Conference in Spokane.

NWPPA is a not-for-profit association of 150 consumer-owned utilities in the western U.S and Canada. Its Safety Heroism Award recognizes an employee who displayed an act of unselfish and voluntary assistance in a situation where life, significant injury or significant property loss would have been incurred but for the efforts of the individual.

For Wellington, this unselfish act occurred on the evening of July 14, 2021.

That day, Wellington had called in sick and was getting ready to turn in for the night when he heard a car accident right outside his house. The accident caused a power pole to be knocked down along with energized lines.

Without hesitation, Chris hurried outside to offer support. He noticed smoke billowing from where the accident occurred and quickly checked on the driver of the car that struck the pole. The situation quickly transitioned, and the car was engulfed in flames shortly after the incident. Thankfully, the driver was able to safely escape, and before anything else, Wellington checked on them to make sure they were okay.

Wellington then rushed to notify authorities and UEC line crews to respond to the incident. Knowing there were energized lines at the scene, Wellington hurried to the nearest substation to verify the circuit, and ultimately to de-energize the line.

This quick action allowed emergency authorities to attend to the individual at the scene as soon as they arrived.

“If it wasn’t for the quick response and action from Chris, there may have been multiple electrical contacts and even possible fatalities,” said Kevin Knutz, UEC Manager of Operations. “Even though Chris was at home and sick – he was proactive, and his voluntary assistance kept this life-threatening situation from becoming worse.”

Although the incident was out of the ordinary – the quick reaction and selflessness from Wellington was no surprise. “The only piece of the incident that surprised us is that Chris called in sick that day,” Knutz said. “When hearing of the incident afterwards, we were not surprised to hear of Chris’ selfless act and quick action – we are very lucky to have Chris at UEC.”