On a summer day in the forest east of Pendleton, Ryan Young and a team at UEC take another step toward building a better electric grid. The team is installing an updated version of a “recloser” and related communications equipment on a power pole in a project designed to make the system more efficient and reliant 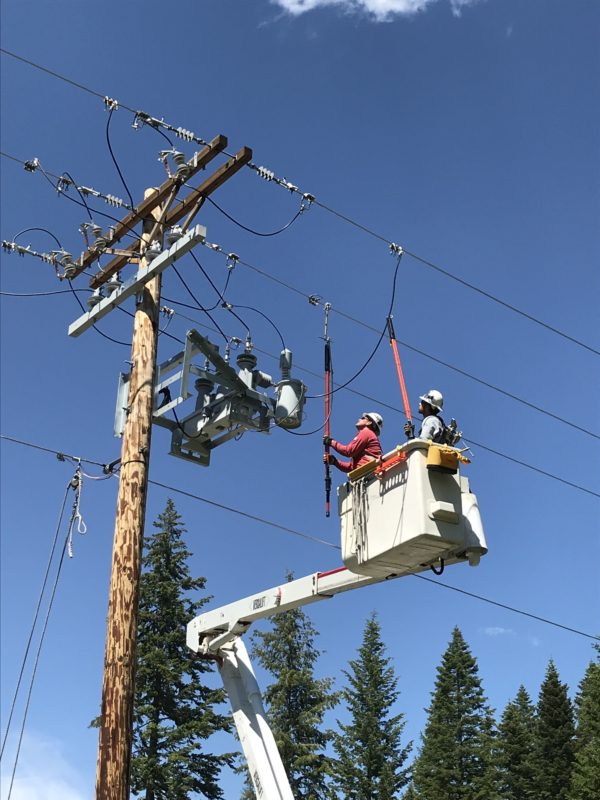 Traditionally, restoring outages has been a manual and time-consuming process for electric utilities. With limited information, restoring power often required intensive field work to identify and correct the issue or isolate lines while restoring power safely.

In recent years, UEC has upgraded its control and data system, outage management software and other equipment to help operators at its command center in Hermiston more quickly detect outages and more accurately predict their location, without the time-consuming need to send a crew to manually check miles of power lines. The new reclosers build upon that system.

“Installing new reclosers is a prime example of expanding those capabilities out to devices in the field,” said Young, a UEC distribution engineer who spearheads the recloser replacement project.

Like a circuit breaker in a home, a recloser on a power pole performs its job when trouble occurs. There are many instances when trouble is fleeting, such as when a tree branch brushes against a line or the wind slaps two wires together.

A recloser stops the flow of electricity, then immediately tries to restore it if it’s temporary. (When your lights flicker, it may be a recloser doing its job.) This automatic circuit recloser – a technology that dates back nearly a century – can eliminate prolonged or unnecessary outages.

Compared to the older-style reclosers, UEC’s new reclosers are more easily customized and have advanced capabilities to protect and automate the system.

In order to restore power, the old reclosers needed to be manually switched back online after a fault is cleared by a line worker. With the new reclosers, system operators can remotely isolate the location of a power outage and re-route power around the source of the problem while line crews concentrate on repairing the system.

The newer reclosers also require less maintenance and raise fewer environmental concerns, as they use solid material instead of oil to prevent electrical arcing inside the device, Young said.

Young was raised in Irrigon and graduated in electrical engineering from Oregon State University. His family ties – his father and brother are electricians – sparked his interest in the field, and fresh out of high school he began working summers at the Coyote Springs Generating Plant near Boardman. 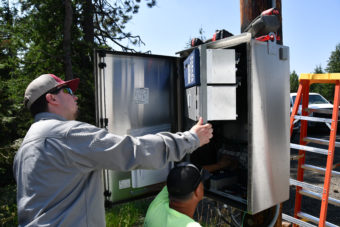 The project to replace the oldest reclosers on the UEC system started with 14 installations east of Pendleton. Over the next few years, a total of 66 new reclosers will be installed at locations throughout UEC’s system where they will have the greatest impact.

UEC engineers, line workers, IT specialists and other staff have contributed to planning and implementing the Recloser Replacement Project. “Adopting a new technology into an existing system is always a challenge and Ryan and the team have done a great job in moving this project forward,” said Cole Bode, UEC’s Manager of Engineering.

With recloser replacement only one of his projects, “So much is happening at UEC as we continue to grow,” Young said. “With the variety of things to do, it’s always exciting to come to work.”