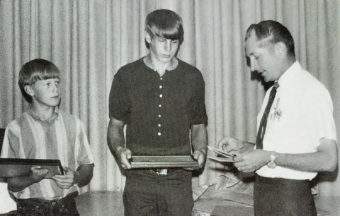 Two Hermiston brothers, John and Mark Huddleston, aged 14 and 11, earned the admiration of Oregon Governor Tom McCall in 1971 for helping avoid a tragedy in the making.

As the story was recounted in Ruralite, John and Mark had finished working in one of their father’s alfalfa fields on Walker Road when they noticed UEC serviceman Joe Woolman checking the transformer bank on an irrigation pump. The two boys walked over to watch.

As Woolman replaced a fuse in the 480-volt switch, he moved the handle on the switch up slightly, causing the spring-loaded switch to close on him. The energized fuse burned him on his hand, elbow and stomach. The two boys had first-aid training and knew not to touch Woolman until he jerked free from the electrical charge. When he did, John immediately noticed the most severe burn had been on the inside of his elbow, where a ruptured vein was bleeding heavily.

John took off his shirt and the boys applied a tourniquet on Woolman’s arm and treated him for shock. Running to the alfalfa field, they summoned their older brother Mike, who drove Woolman to a doctor.

For their actions, Mark and John received a letter of commendation from McCall, who said, “From information I have received it’s apparent your quick actions were probably instrumental in saving his life.”

They also received a certificate of merit from the Oregon Worker’s Compensation Board, and Russ Dorran presented each boy with a $25 savings bond in appreciation of their efforts.

For a complete history of Umatilla Electric, stop by our Hermiston office and pick up your copy of When the High Line Comes - authored by our own Member Services Administrator, Steve Meyers.